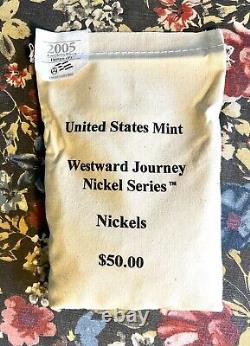 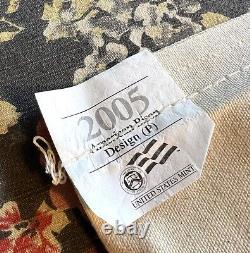 Condition : New/Unopened; as received from the US Mint (see photos). Please feel free to message.

In 2004 and 2005, the U. The American Bison Nickel is the third of four coins in the series. The obverse design, for the first time in 67 years, shows a new likeness of America's third president, Thomas Jefferson. The design is based on the marble bust by the French sculptor Jean-Antoine Houdon, completed in 1789. The portrait was made age-appropriate to his presidency by utilizing later paintings by Gilbert Stuart and Rembrandt Peale. The new obverse image of Jefferson replaces the image that had been on the nickel since 1938. The reverse features an American bison, referred to as a buffalo. Lewis and Clark expedition journals described the buffalo, and it was an animal of great significance to many Native American cultures. Obverse (heads): The design bears, for the first time in 67 years, a new likeness of Thomas Jefferson based on a bust of Jefferson by Jean-Antoine Houdon. The "Liberty" inscription is based upon Jefferson's own handwriting.

Reverse (tails): Features the American bison, recognizing the Native Americans and wildlife encountered by the Lewis and Clark expedition. This item is in the category "Coins & Paper Money\Coins: US\Nickels\Jefferson (1938-Now)".