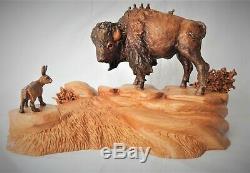 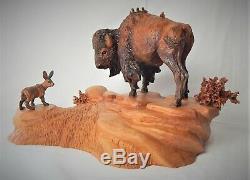 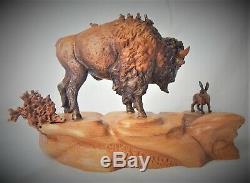 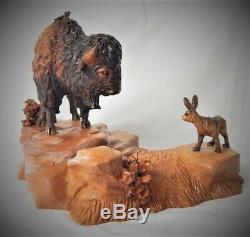 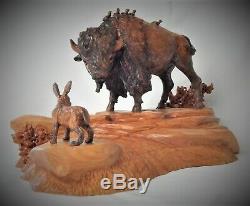 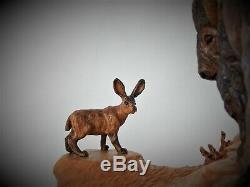 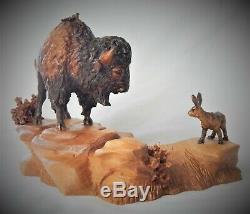 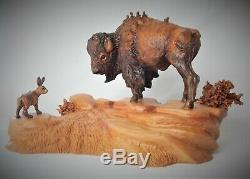 Original wood carving of a bull bison and a jack rabbit titled "A Day On The Prairie", by Joan Kosel. It is made from cherry and stain was used for coloring. It is finished with tung oil. Carving dimensions are approximately 12" W x 9" D x 8 1/4 T.

Each carving is signed and numbered on the bottom by Joan. When she completed her first piece at age 13 she marked it on the bottom of the base as #1, her second as #2 and so on. The number on each piece indicates it's place out of all the carvings she has ever completed. To dust, apply a light coat of lemon oil with a paint brush and wipe dry with a soft cloth.

Joan was born and raised in Red Lodge, near the beautiful Beartooth Mountains in South Central Montana. She has always loved the West, the wildlife that inhabits it, and art. As a little girl she enjoyed drawing and painting pictures of mountain scenery, wildlife and cowboys.

One day when she was thirteen, she was watching her Dad work on a wood carving of a moose. She asked if he would show her how to do that and he agreed. With the use of his carving tools, a lot of coaching and for the first several pieces him finishing the detailing for her, her carving career began.

It took a lot of mistakes and pieces that never saw completion before she began to get the knack for it. Her only education in carving has been her Dads guidance, a couple of instructional carving books and her own mistakes. When she was in her early twenties Joan began taking her work around to art shows in Montana and Wyoming. Since then she has acquired several collectors, has her work displayed in galleries and has received several awards including two years in a row Best of Show at the National Art Show in Dubois, WY. She currently lives in Northern Arizona.

Joan Carves using mostly power tools such as a band saw, angle grinders, flex shaft grinder (primary tool used) die grinders and some knife work as well. She uses only hardwoods and usually finishes them with low gloss tung oil to bring out the natural beauty of the woods she chooses to carve in. All of Joans carvings are signed on the bottom and are marked with the year of completion.

She also numbers each piece. The number signifies that carvings place in sequence of all the carvings she has ever completed for the enjoyment of collectors. The item "BULL BISON / BUFFALO ORIGINAL CHERRY WOOD CARVING SCULPTURE BY JOAN KOSEL" is in sale since Friday, April 17, 2020. This item is in the category "Antiques\Decorative Arts\Woodenware\Carved Figures". The seller is "mk3855" and is located in Seligman, Arizona.