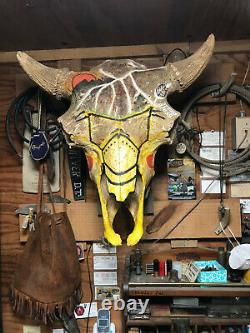 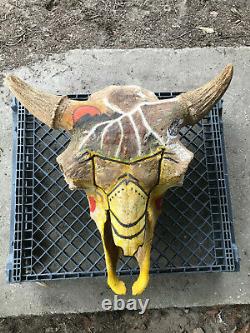 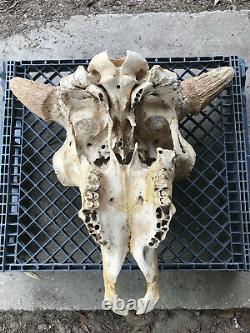 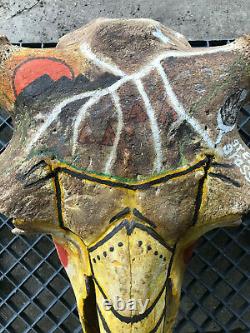 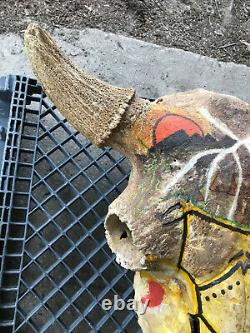 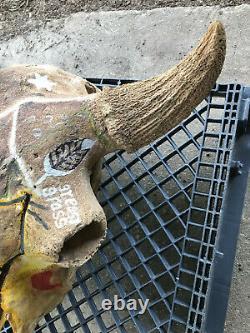 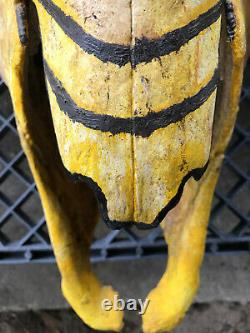 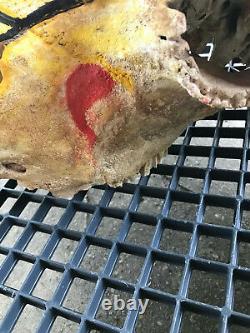 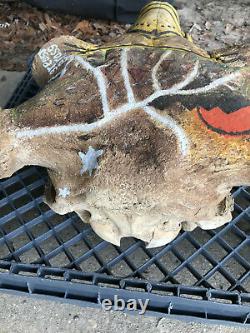 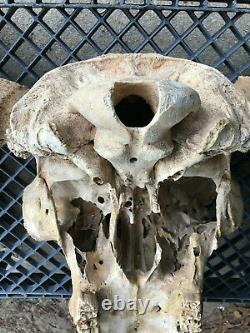 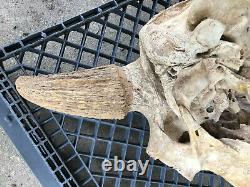 NEAR PERFECT SACRED BISON HEAD FROM THE PLEISTOCENE ICE AGE ERA, PROBABLY FROM 10 TO 15,000 YEARS BP. Authentic, discovered and dug by me in 1998 from private land with permission.

I have been exploring the SOUTH DAKOTA BADLANDS since 1985 in the. White (CLAY) River/Pass Creek Basin area.

The ROSEBUD AND PINE RIDGE RESERVATION are located along the WHITE RIVER, with WOUNDED KNEE to the south. The head came from a creek bank (wall) with six feet of White River Clay soil overburden. It came out mostly complete but lost some small pieces while washing off mud in the creek.

It is missing the horn material as most are from weathering prior to being covered with mud preserving it till present time. It measures 22 3/4 inches at the horn tips, 24 inches top to nose, eye sockets are 3 5/8 inch across. It was stabilized with glue to keep the pieces in tact so has traces left on various parts. It was hung on a slanted plaque in my shop where it has been since 1998.

I had it lightly painted by a native female artist, and at my request she added tears of blood to mourn the near total annihilation of the buffalo species by the US government native removal policy. The remainder of the scene commemorates the Native American struggles to maintain their heritage with one of their most memorable achievements "THE BATTLE OF THE GREASY GRASS" AND CUSTER'S LAST BLUNDER.

I have been the sole owner of this piece, so it has never been on the market prior to now. The near vertical clay wall that encased it covered and preserved all but the tip of one horn that exposed the bone from year to year. Once exposed the bone deteriorates rapidly due to the sun's rays and plains atmosphere. The bone is not petrified, but remains in a natural age deteriorated condition. It was not bleached white so retains mostly the color of the soil that encased it.

The head was not completely cleaned and traces of bad land soil still remains in cavities and crevices. Four molar teeth remain in the back slots, the other teeth fell out prior to the mud covering. This skull has the nose bone's in tact, most on the market today do not. This one will be one of the most complete examples found today. The head weighs 35 pounds or so. This piece is a great asset to any museum, den, sporting goods store, or man cave. Do not display it outdoors. Check photo's for clarity & condition. This item is in the category "Collectibles\Rocks, Fossils & Minerals\Fossils\Vertebrates\Mammals". The seller is "gunsmok4" and is located in this country: US. This item can be shipped to United States.